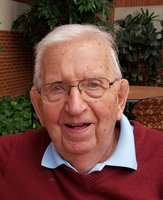 Eugene A. Czajkowski, 97, formerly of Rome and Verona Beach, passed away Tuesday, January 21, 2020 at the Masonic Care Community in Utica. Born in Rome on December 19, 1922, he was a son of the late Ambrose and Stella (Pietruch) Czajkowski. He was a graduate of Rome Free Academy and attended Syracuse University. Gene served his country in US Navy during World War II. While in the service, he met his wife Elizabeth and they were married May 12, 1945 in Norman, OK. Together they shared a blessed union of 72 years. Betty passed away November 30, 2017. After being honorably discharged from the Navy, Gene and Betty settled in Rome. He joined his father and brother Frank in the family business at Rome Oil and Coal and stayed there until retiring in 1990. Gene was a member of Transfiguration Church in Rome and St. Mary’s of the Lake in Verona Beach. As one of his granddaughter’s remarked, “He created such a beautiful family and gave us each an unbelievable foundation to grow families of our own.” Gene is survived by three daughters and sons-in-law, Pat and Paul Gregory, Beth and Rob Kinsella and Mary and Bill Draper; a son and daughter-in-law, Gene and Cindy Czajkowski; two sisters, Toni Klemm and Lu Czajkowski; eleven grandchildren, seventeen great-grandchildren and several nieces and nephews. He was predeceased by a daughter, Norma Jean; two sisters, Phyllis Seegert and Marie Sentell; and two brothers, Frank and Ambrose Czajkowski. A Mass of Christian Burial will be held at Transfiguration Church at a later date. There are no calling hours. In lieu of flowers, contributions in Gene’s memory may be made to the Masonic Care Community, 2150 Bleecker St., Utica NY 13501.