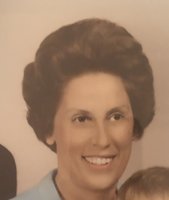 Rose Marie Anken (Guiliano) of Rome, NY, died on January 8, 2021. She was born in Rome on December 20, 1932, daughter of Philip Guiliano and Anna Guiliano (Trificante). Rose Marie, known also as Rosemary and Pidgie, graduated from Rome Free Academy and attended classes at Mohawk Valley Community College as a returning adult student. She married her beloved husband of 62 years, Stuart Warren Anken, on May 10, 1958. Rosemary lived a committed and busy life as a mother, paralegal, community activist and volunteer. She placed the highest value on education and took the greatest pride in her children’s educations and contributions. When we were growing up, she taught us to have concern and compassion for those who may need an extra hand due to difficult circumstances, and each summer for several years we hosted children from New York City during the summer as part of the Fresh Air Program. Long before working mothers were commonplace, in the 1950’s, Rosemary began an accomplished career as a paralegal in the law offices of Griffith and Pileckas, working full-time as a young woman and mother. After raising her five children as a full-time mother, community activist and volunteer, she returned to the paralegal work she loved. One of her most fulfilling roles was as a member of the Board of Education for the Rome Schools from 1976 until 1988, serving as Board President from 1979-1980. In this capacity she advocated for students with disabilities during the late 1970’s, just after the passage of the Individuals with Disabilities Act in 1975. She was also responsible for starting the first newspaper recycling program in Rome, while serving as Chair of the Rome Chamber of Commerce’s Environmental Improvement Committee. She also served as a Trustee of Trinity United Church of Christ and became the first woman in the church’s history to serve as President of the Church Council. In addition, she took on leadership roles in the Rome United Way; Community Concerts Association of Rome; American Field Service; the Downtown Shared Ministry Program; and the Rome Area Religious Conference as a member of its Inter-Faith Committee. After her husband Stuart became one of the first licensed chiropractors in New York State in 1969, Rosemary actively supported and contributed to the acceptance and growth of Chiropractic in the state. She had great energy and was passionate for a good cause. She was also a committed Democrat and loved all things political, running for President of the Rome City Council. Rosemary was an outgoing and fun-loving person with a great sense of humor, but as our father said, she could deliver a great counterpunch, too. To her children and grandchildren, mom will be remembered first and foremost for her generosity and her delicious Italian and Swiss cooking and baking. On the softer side, she enjoyed collecting antiques, and our childhood home and parents’ camp on Fourth Lake in Eagle Bay are filled with her treasures. She particularly enjoyed collecting Roseville Pottery. Playing the piano and listening to music brought her much enjoyment, as well. In addition to her beloved husband Stuart, Rosemary is survived by her children Debra Anken-Dyer (Charles Dyer), Elise Anken-Bennett (Steve Bennett), Craig Anken (Rachel), Stuart J. Anken, and Mark Anken (Cheryl) and grandchildren Alexandra Dyer; Amber and Brian Bennett; Nicole, Krista, Teresa and Joshua Anken, Adam Gillette; and Santino Calandra. Her sister Johann Uvanni also survives her, as well as a large extended family including nieces, nephews and cousins. Her sister Barbara Campbell predeceased her in 2020. Her sister Loretta Acchino McGregor and daughter-in-law Maureen Anken (McClendon) both predeceased her in 2001. The family would like to thank the following caregivers who cared for our mother until the end of her life with kindness and compassion: her devoted and loving son Stuart J. Anken, Robin Lalonde, Shirley Bristol, Pamela Wilson, Shiana Hernandez, Katerina Farber, Ashley Church, Ronald Johnston and several other caring home health aides over the past seven years. A private prayer service for the immediate family will be held before interment at St. John’s Cemetery. Services and a celebration of life will be held at a later, safe date. In lieu of flowers, donations may be made to any of the following: International Fellowship of Christians and Jews, 30 North LaSalle Street, Suite 4300, Chicago, IL 60602-2584; (ifcj.org); the Alzheimer’s Association, 225 North Michigan Avenue, Floor 17, Chicago, IL 60601 (ALZ.org) or the Fresh Air Fund, 633 Third Avenue, 14th Floor, New York, New York 10017 (freshair.org). Private services will be held at the convenience of the family. There are no calling hours. Arrangements have been entrusted to Nunn and Harper Funeral Home, Inc. 418 N. George St., Rome.