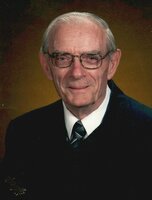 Albert C. McGuire, Jr., 92, of Felton Ave, Rome, passed away peacefully on Tuesday evening, August 31, 2021, at Rome Memorial Hospital Skilled Nursing Facility. He was born on February 19, 1929, in Rome, the son of Albert C. and Ruth Waller McGuire, Sr. He was a graduate of Rome Free Academy, Class of 1946. He later went on to receive his bachelor’s degree in accounting from Utica College of Syracuse University. On June 10, 1950, Al was united in marriage to Joan Loftus in Rome. Joan passed away on January 28, 1997. Al retired in 1996 from Williams Energy in Rome where he was employed as an accountant. He previously worked for Nolan-Hayes and Warcup (Adolphi). Al was a longtime member of St. Paul’s Church where he served as an usher and Eucharistic Minister. He also taught Confraternity of Christian Doctrine (CCD) classes for many years. Al received the Immaculata Award for Service in 2011 because of his many years of generously and unselfishly giving himself to his parish. He was a long-time Boy Scout leader and worked with the Girl Scouts. He was a former member of the Lake Delta Yacht Club and enjoyed sailing, boating, and fishing. He was an avid stamp collector and loved trains. Surviving are his four daughters, Kathleen (Frederick) Welch, of Dawsonville, GA, Nancy (Steven Woytowich) McGuire, Karen (Donald) Lubecki, and Maureen (Salvatore) LaMonica, all of Rome; ten grandchildren, Gregory (Keri) Welch, Sherry (John) Wallace-Young, James (Cheryl) Herrin, Jennifer (Jorge) Ayala, Jacqueline (John) Herrin-Dorso, Matthew (Danielle) Lubecki, Mark (Morgan Aley) Lubecki, Christina (Carey) LaMonica-Phair, Meghan LaMonica, and Samuel LaMonica; fourteen great-grandchildren; and a beloved dog, Tito. Al’s family wishes to express their gratitude to the staff of Rome Memorial Hospital Skilled Nursing Facility for the outstanding care and compassion shown to him. A Mass of the Christian Burial will be held on Wednesday, September 8, 2021, at 10:30 AM at St. Paul’s Church where the Rev. Robert Kelly officiate. Interment will take place in St. Peter’s Cemetery. Family and friends are invited and may call on Tuesday from 4:00 to 7:00 PM at the Nunn and Harper Funeral Home, Inc., 418 N. George St., Rome. Memorial contributions may be made in Al’s memory to the St. Paul’s Church Memorial Fund. You may light a candle, send a message of sympathy, and read the obituary at www.nunnandharper.com.