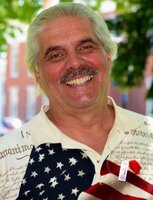 Joseph R. Fusco Jr., 63, of Rome, died peacefully on December 23, 2021 after a brief illness. Joe was born in Rome on July 27, 1958 to Joseph and Wanda (Milewski) Fusco. Joe attended Gansevoort Elementary, Transfiguration School, and graduated from Rome Free Academy in the Class of 1976. Throughout the late 1970’s and 1980’s Joe began to hone his skills in the automotive industry; owning his own garage while working for several local businesses, including Corigliano’s Towing, Revere Copper and Brass, Nolan Jampole Products, and the City of Rome Public Works. When Joe wasn’t on the job, he would often be found racing his motorcycle at Esta Speedway where he was a fierce competitor. In 1984, Joe met the love of his life, Laurie Barone, at JJ’s Bar. It was at JJ’s where Joe confidently asked Laurie, “Could I be so bold as to introduce myself?”, and the rest is history. The couple were united in marriage on September 20th, 1984 at a private ceremony at the Fusco family home, officiated by Rocco Versace. The newlyweds welcomed a son, Joseph R. Fusco III in 1985. In the years to follow, Joe proudly worked at Griffiss Airforce Base performing general maintenance and seasonal snow removal, as well as the Rome DPW, and St. Mary’s Cemetery. During this time, Joe, a young father, made it a priority to spend as much time as possible with his young son, often taking him on work adventures before making their way to Mapledale Dairy for coffee, donuts, and quality time with friends and neighbors. Joe and Joey were often inseparable, whether it was teaching Joey to drive his Jeep at age 3, singing God Bless America at the Capitol Theatre talent show, or coaching his son’s youth sports teams. The bond between Joe and his son would only grow stronger throughout the years. Joe became active in local politics in the early 2000’s and served as the 4th Ward Common Councilor for two terms. His unwavering commitment to his community was infectious. He could often be found spending countless hours helping to organize various charitable and community events, including; Relay 4 Life, the Ride For Missing Children, Honor America Days, Canal Fest, and his favorite’s the St. Joseph’s Day celebration at the Franklin Hotel and the annual Fourth of July motorcycle ride. In 2011, Joe was successfully elected as the City of Rome’s 42nd Mayor. He strived to be a voice for all of Rome’s citizens, especially those who were willing to roll up their sleeves alongside him. Joe would always say “many hands make light work”, and encourage constituents to take action in their neighborhoods and help one another in times of need. During his time in office, Joe helped to attract new residential and commercial developments, completed critical infrastructure improvements, and oversaw the completion of the Mohawk River Trail and Bellamy Harbor Park waterfront project. As Mayor, Joe was incredibly proud to work alongside the brave men and women of the Rome Police Department and Rome Fire Department. Joe was overjoyed that his son Joseph III became a Rome Firefighter in 2007. After leaving office, Joe completed his career at the New York State School for the Deaf. He happily retired in April of 2021, where he could dedicate more of his time to his cherished grandchildren, Joseph IV and Julianna Fusco. Some things never change; little Joseph and Julianna loved to go on early morning snow plow excursions, and even helped control the plow, steer the driver’s wheel, and of course, go for donuts at the local coffee shops. No one ever had to wonder what was on Joe’s mind because he was going to tell you anyway. Joe adored the time he spent with his friends at the Iron Kettle and Cianfracco’s Subs “solving the world's problems” (he’d say). On a weekly basis, Joe would post photos of old hand tools and farm equipment, he called it Old Tool Tuesday. Joe had a profound respect for the tools and the people that built our country with their bare hands. Joe was many things to many people; a loving husband, father, and grandfather. He was a loyal son, brother, uncle, cousin, and friend. He was also a man of faith and believed in serving others to the best of his ability. The best way we can honor Joe’s memory is to do what he did; and that’s roll up our sleeves and take action in our community. Joe was preceded in death by his father Joseph R. Fusco, his mother Wanda Milewski, and relatives; Sharon Fusco, Albert Barone, Gloria Barone, Artie Fusco, Randy Meisenhelder, and Amelia Bambury. Joe is survived by his loving wife Laurie Fusco; his son and daughter in law Joseph III and Cassandra (Uvanni) Fusco, his step mother Maxine Fusco, and sisters; Christine Bambury, Barbara (Michael) Crone, Peggy Morgia, Mary Rose Fusco, Donna Kirch and Angela (Sam) D’Urso; brother in law David (Karen) Barone, his step-family; Kathy Jasiewicz, Tim (Tina) Meisenhelder, Rick (Melody) Meisenhelder, and Ann Meisenhelder, and Uncle Arthur (Pat) Fusco. The Fusco Family would like to acknowledge the dedicated medical professionals at Rome Hospital, Upstate Medical Center, and AmCare Ambulance for their care of Joe. A Mass of Christian Burial will be celebrated on Thursday, December 30, 2021 at 11:00 a.m. at St. Peter’s Church, 200 N. James Street, Rome, with the Rev. Sean O’Brien officiating. Friends and family may call on Wednesday, December 29, 2021 from 4 to 8 p.m. at St. Peter’s Church. Arrangements have been entrusted to Nunn and Harper Funeral Home, Inc., 418 N. George St., Rome. You may light a candle, send a message of sympathy, and read the obituary at www.nunnandharper.com.