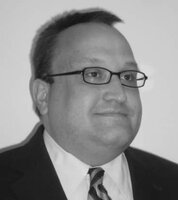 Charles M. Thomas, 55, of Auburn, passed away on Wednesday, January 5, 2022, at Rome Health. Born in Vicenza, Italy, on the United States Army Base, Camp Ederle, he was a son of Donald Thomas and Judith (Williams) Sweet. He graduated from West Genesee High School, earned a Bachelor’s of Arts Degree from Syracuse University and received a Juris Doctor Degree from Dayton University. On September 18, 2004, he was united in marriage to Jodi (Brown) Thomas. Charles was a member of the NYS Bar Association and practiced law for Jefferson County, the DA’s office of Cayuga County and eventually went in to private practice in his hometown of Auburn. Charles was a huge sports fan and loved the SU Orange, Buffalo Bills and NY Yankees. He also enjoyed golfing, attending concerts, going up to camp on Sandy Pond and vacationing in Florida. He is survived by his father and step-mother, Donald and Janice Thomas; in-laws, Calvin and Joan Brown; two children, Cherise and Jonathan Adams; five siblings, Randall Thomas (Penny) Amy Fentress (Tom), James Thomas (Jill) , David Thomas (Terri) and Jeff Thomas (Amy); and several aunts, uncles, nieces, nephews, cousins and many friends and colleagues. He was predeceased by his wife, Jodi; mother and step-father, Judith and Robert Sweet; and a niece, Taylor Fentress (Shell). Private services will be held at the convenience of the family. There are no calling hours. Arrangements have been entrusted to Nunn and Harper Funeral Home, Inc., 418 N. George St., Rome.