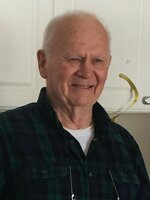 Robert Lee Kegebein, Jr., 82, of Verona, passed away on Thursday, January 13, 2022 at his home. He was born in Rome on March 9, 1939, a son of the late Robert L. and Dora (Storey) Kegebein, Sr. He was a graduate of Vernon-Verona-Sherrill High School and on April 30, 1960, he was united in marriage to Patricia Stellwagen. Robert served in the Army National Guard from 1959-63. He then went on to a long career as a truck driver with Dairy Lea Cooperative and retired after several years with Walmart. Robert kept beautiful saltwater aquariums in his home for many years. Surviving besides his loving wife of 60 years, Patricia, are five children, Tracy Kegebein, Wallace Kegebein, Gregory Kegebein, Robert Kegebein III (Rebecca) and Douglas Kegebein; a brother, James Kegebein; a sister, Barbara Foster (Russ); nine grandchildren and seven great-grandchildren; and several nieces and nephews. He was predeceased by a son, Michael Kegebein. Private services will be held at the convenience of the family. There no calling hours. In lieu of flowers, please consider a donation in Robert’s memory to the Multiple Sclerosis Foundation, 6520 N. Andrews Ave, Fort Lauderdale, FL 33309-2132. Arrangements have been entrusted to Nunn and Harper Funeral Home, Inc., 418 N. George St., Rome.