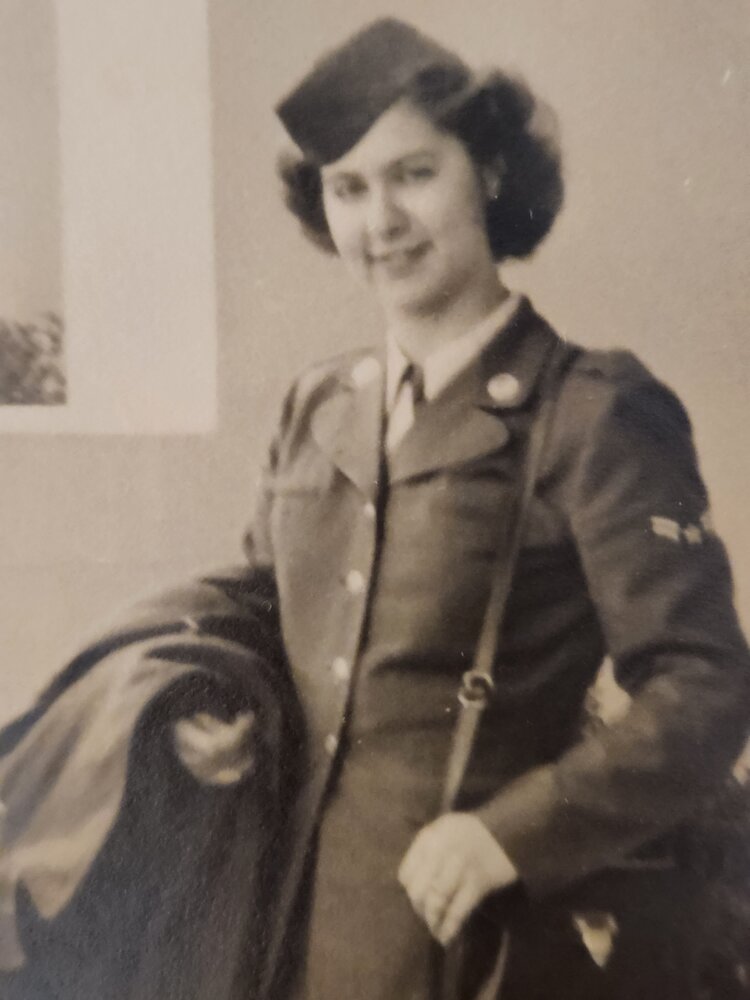 Obituary of Bertha A. Fanning

Please share a memory of Bertha to include in a keepsake book for family and friends.
View Tribute Book

Bertha Amelia “Amy” Reimers Fanning, 89, passed away on July 22, 2022 one day short of her 90th birthday at the Abraham House, Rome, NY. Amy was born on Staten Island, New York City, NY to Alfred Carl Reimers and Bertha Marie Johanna Kochel the fourth of six children. She graduated from Janesville High School in June 1950, the 7th of 300 students.

Amy enlisted in the U.S. Air Force as a WAF in June 1951; took basic training at Lackland AFB, San Antonio, Texas followed by technical training at Keesler AFB, Biloxi, Mississippi to become a radio operator. In April 1952 she graduated first in her class of five women and over one hundred men and earned her second stripe. She was subsequently assigned to March AFB Riverside, California in mid-1952; took her Senior Radio Operator exam in early 1953 earning her third stripe; was assigned to Hickam AFB, Oahu, Hawaii; then honorably discharged in June 1955. She worked briefly afterwards for Pan American at the Honolulu International Airport as a teletype operator.

Amy had a lifelong love of airplanes and aviation. She received a fifteen minute flying lesson as a high school graduation present, continued flying lessons and made her first solo takeoff by April 1951. Around 1954 she passed the written test for commercial navigation, but the flight school closed before she could take her final flight test.

Amy also enjoyed photography as a hobby. She met her future husband Francis “Frank” Fanning, a fellow airman, at the base photo shop in December 1954. The young couple married on November 19, 1955 in the Hickam AFB chapel, moving to California, Texas and finally Rome, New York following Frank’s career. Until the early 1980s, Amy was a stay at home mother and housewife looking after her growing family. In 1970, Frank divorced her leaving her to raise five children on her own. She never remarried. From about 1973 to 1974 she attended and graduated from the Utica School of Business eventually taking an office job at Griffiss in the early 1980s. When the base closed in 1995, Amy remained working at the Rome Laboratory which was one of the few remaining units after the base closed. Amy loved to read and valued education. While working at the base, she took college classes for many years at Mohawk Valley Community College, but her program was discontinued before she could graduate. She retired in 2009 at age 77.

Amy will be cremated and buried in a military cemetery. If you wish to remember her, the family asks that you support the Abraham House, Rome,NY. https://www.theabrahamhouse.org/donate/

A Memorial Tree was planted for Bertha
We are deeply sorry for your loss ~ the staff at Nunn and Harper Funeral Home, Inc.
Join in honoring their life - plant a memorial tree
Online Memory & Photo Sharing Event
Online Event
About this Event

Look inside to read what others have shared
Family and friends are coming together online to create a special keepsake. Every memory left on the online obituary will be automatically included in this book.
View Tribute Book
Share Your Memory of
Bertha
Upload Your Memory View All Memories
Be the first to upload a memory!
Share A Memory
Plant a Tree