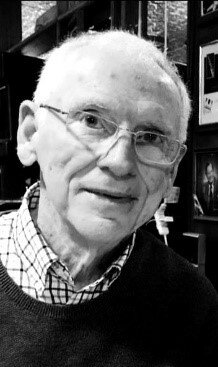 John T. Clancy of Rome, New York and Eagle Bay, New York passed away on September 1, 2022, after a long illness.

John was born in Meadville, Pennsylvania on December 1, 1935, the son of James A. and Elizabeth (née Sullivan) Clancy.  He was educated in Meadville Schools and received a bachelor's in Electrical Engineering from the University of Detroit in 1958.  At U of D, he was a member of the Saint Francis Club, the Choral Society, and the Air Force Reserve Officer Training Corps (ROTC) detachment.  Commissioned a first lieutenant in 1958, John was assigned to the Rome Air Development Center (RADC), now AFRL Rome Lab in Rome, New York.  In 1979 he received a Master’s in Electrical Engineering from Syracuse University.

John always put his family first in everything he did.  He found true joy in the accomplishments of others, especially his children and grandchildren and sought to support and nurture them in any way he could.  He lived a life of quiet example and left his family a legacy of warmth and love that they will always remember and cherish.  He is survived by his beloved wife of 58 years, Carol (née Baynes) Clancy, Rome, New York; his children, Tim Clancy, Alexandria, Virginia; Kate Clancy Thompson (Ken), Shelburne Vermont; and Maureen Clancy Pelisson (Pat), Telluride, Colorado.  In addition, he is survived by his grandchildren, Brendan Thompson, Boston, Massachusetts and Maura Thompson, New York, New York; his sister, Mary Ellen Snyder, Tucson, Arizona, several nieces and one nephew.   He was predeceased by his mother and father, his father and mother-in-law Bill and Eunice Baynes, brothers Jim and Joe Clancy and his brother-in-law Paul Snyder.

John enjoyed a long and distinguished career in the United States Air Force first as an officer then as a civilian totaling 32 years of service to his country.  In 1961, he was deployed as part of a sensitive mission that helped secure and prepare Templehoff Airfield in West Berlin for a potential second airlift.  For his role in the Berlin Crisis, he received the Air Force Commendation Medal.   John’s innovations were integral to the development of numerous leading-edge radar systems in use today and his advances in Over-the-Horizon radar technology led to RADC receiving the Air Force Outstanding Unit Award in 1965.  During his career, John served on several Air Force and NATO technical boards including Project FORECAST II, an effort that charted a 20-year technology vision and plan for the Air Force and for which he received the Air Force Meritorious Service Award in 1986.  On his retirement from public service in 1990, John began a twenty-year second career in private industry supporting the Department of Defense and the Air Force in radar development with Decision Science Applications (DSA) in Rome now part of L3Harris, finally retiring for good in 2010.

John was known to all as a quiet, kind, and gracious gentleman who truly lived his Catholic faith passed down from his mother and father.  He was a communicant of Saint Paul’s Church where he served as a Eucharistic Minister and member of the Parish Council.   A gifted singer, he possessed a pure Irish tenor voice that was often heard at family weddings and after a few rounds at The Savoy where “Danny Boy” was always requested.  He loved downhill skiing beginning in the early 1960’s with the Griffiss Ski Club at Snow Ridge Ski Area and later at Woods Valley where he was a longstanding season pass holder.  He also remembered fondly the times he was able to visit and ski Telluride with his family. A member of Teugega Country Club as well as Thendara Golf Club, John was an avid golfer who enjoyed many rounds with his friends and family.  He enjoyed family trips to his beloved hometown of Meadville, Ireland, Arizona, and the Adirondacks where he spent many happy years at his camp at Eagle Bay surrounded by family and dear friends.  He greatly treasured his two trips to Ireland, loving all things Irish especially Irish music.  John was also a steadfast supporter of Syracuse University basketball and was lifelong fan of the Cleveland Indians baseball team now the Guardians.  Even though Cleveland did not reciprocate his affections, finishing last many more times than first, John never lost faith in Cleveland, remaining a passionate fan all his life.

You may view the obituary and post a message of sympathy at www.nunnandharper.com.

Look inside to read what others have shared
Family and friends are coming together online to create a special keepsake. Every memory left on the online obituary will be automatically included in this book.
View Tribute Book
Share Your Memory of
John
Upload Your Memory View All Memories
Be the first to upload a memory!
Share A Memory
Send Flowers
Plant a Tree