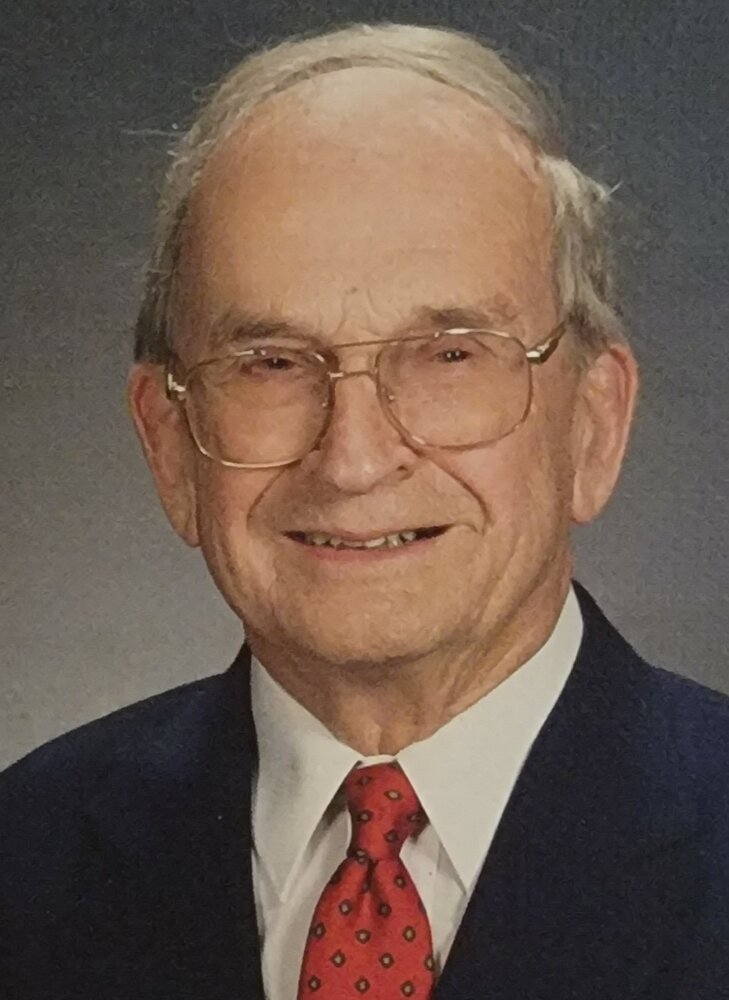 George Joseph Olney, Jr., 98, passed away peacefully at his home in Westernville on December 7, 2022.

George was born on March 13, 1924, in Rome, NY, the oldest son of George J. Olney and Katharine Floyd Olney.  George grew up inWesternville and attended Rome schools, graduating from Rome Free Academy.  After graduation, he joined the Army and served our country in Europe during World War II.  After the war, he began working in the family businesses of Olney & Floyd Canning Company of Lee Center and the G.J. Olney Machinery Company of Westernville.  In 1948, George married Dorothy Davis of North Western, whom he first met riding the bus to RFA.  George and Dorothy built a home on Main Street in Westernville where they raised their four children.  Dorothy passed away in October of 1977.  Several years later, George married June Updike Rickard, and welcomed June’s three sons and the Updikes into the family.  George and June spent much of their time traveling and restoring the original Olney homestead until June’s passing in May of 2004.

George was a self-educated mechanical engineer who could fix anything.  After the sale of Olney & Floyd Canning Company to Perfection Foods, George concentrated his efforts on working with his father and two brothers at G.J. Olney, Inc.  He designed a variety of machines for the processing of peas, beans, corn, and other vegetables.  Many of George’s designs are used throughout the world in the canned and frozen vegetable industries.  George retired as president of the company in 1994.

George’s other business endeavors included owning and operating the Jackwax Ski Shop at Woods Valley Ski Area in Westernville, along with his brother-in-law, John “Bud” Sterling.  In 1988, George and his three sons purchased Woods Valley after the sudden passing of his good friend, Dave Woods.  George derived great pleasure in operating the business with his sons and carrying on the Woods Valley traditions for 22 years.  After the sale of the ski area back to the Woods family in 2011, George remained a frequent visitor to the slopes.

George’s pastimes included hunting and fishing in the Adirondacks and Quebec.  He had a love for Mother Nature and was respectful of our resources and ecology, long before it became popular. Every March, George and his children looked forward to tapping his maple trees to make the maple syrup that he enjoyed and loved to share with his friends.  He had a great interest in our country’s history and was proud to be a direct descendant of General William Floyd, a signer of the Declaration of Independence.  He was a member of the Lake Delta Yacht Club, Westernville Historical Society, Descendants of the Signers of the Declaration of Independence, Baron von Steuben Lodge #264, Griffiss Ski Club, and numerous professional organizations.